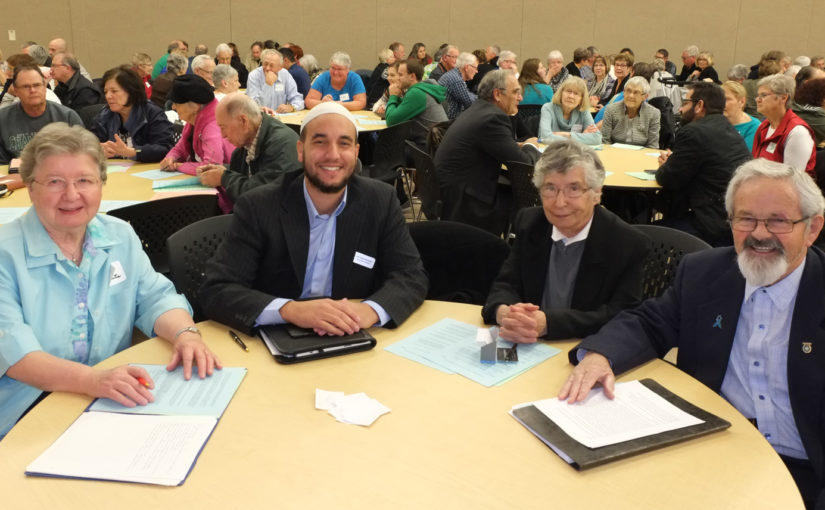 This article was first published on the following source.

Sister Teresita Kambeitz, OSU, guest speaker Dr. Joel Schindel, MD, and organizing committee members Sister Phyllis Kapuscinski, NDS, and Rev. Colin Clay (from left), were among some 350 attending the first session of A Christian Study of Islam: An Introduction, held at the Cathedral of the Holy Family in Saskatoon Oct. 18. Photo by Kiply Yaworski.

SASKATOON — A five-part series in the Roman Catholic Diocese of Saskatoon is offering information and insights into the Islamic faith.

Some 350 attended the first session of A Christian Study of Islam: An Introduction held at the Cathedral of the Holy Family Oct. 18, which featured Rev. Bernard de Margerie providing an overview, with a response from Dr. Joel Schindel, MD, who serves as an associate Muslim chaplain at the University of Saskatoon.

“I think that bewilderment may be the mindset of many of us before the phenomenon Islam in our midst and around the world,” said de Margerie, who along with Sister Phyllis Kapuscinski, NDS, and Rev. Colin Clay organized the series through the Diocese of Saskatoon’s Foundations: Exploring Our Faith Together program.

De Margerie described having one’s worldview challenged by events and changes, “causing tension between fear and resistance on the one hand, and the desire to enlarge one’s openness and comprehension of reality on the other.”

The series is a response to misunderstandings and lack of knowledge about the Islamic faith, he said. The main focus is to be an “undertaking of Christian faith and hope seeking understanding.”

On one hand, many Christians now encounter Muslim neighbors, friends, colleagues, and professionals in the community in a positive way, while on the other hand, there is a “visceral reaction to ISIS in the background” as unending media coverage of injustice, oppression and violence leads viewers “to depression, psychological exhaustion and deadened hope,” de Margerie said.

In the midst of all this there is a need for encounter, for dialogue, and for understanding, he said, particularly in the face of war, violence, strife and unbearable suffering which is causing the displacement of millions in our world.

“I came to see and believe that this unbearable situation impels Christians and Muslims — representing the two predominant religions in the world, by far — along with others, to meet and learn how to live together and find new ways of mutual understanding, justice, compassion, and peace,” said de Margerie, who said he began to “pray harder” about this planetary situation.

Spiritual questions began to emerge in prayer, he said, such as: “What is your plan, oh God, for all your Muslim children?” and “How can I — how can we — as disciples of Jesus, be sisters and brothers to them?”

De Margerie pointed to other insights in recent years — for instance, from hearing Muslim people described the meaning of the Ramadan fast, which echoed with his own experience of Lent and encountering the writings of Christian de Chergé, prior of the Trappist monastery in northern Algeria that is featured in the film Of Gods and Men. The monks lived and served among their Muslim neighbors, developing friendships as those who “pray among others who pray.”

“Brother Christian contributed much through his witness, preaching and writing to deeper reflection and prayer in the church regarding how Christians and Muslims are related to each other in God’s plan of mercy and salvation,” said de Margerie. “The black and white disappears my dear people. There is no black and white, but many shades of grey.”

In his own life, de Chergé had some foundational experiences — including his friendship with a devout Muslim policeman — that shaped his understanding and his vocation to live and serve in Algeria. “If you want religions to come closer together, you have got to have friendships,” stressed de Margerie.

The Muslim friend intervened during a military skirmish to save de Chergé, and lost his own life because of it. This sacrifice profoundly affected the monk. “Christian wrote several years later: ‘In the blood of this friend, I came to know that my call to follow Christ would have to be lived out sooner or later in the very country in which I received the token of greatest love.’ ” In May 1996, de Chergé and six other brothers of the monastery were kidnapped and executed by terrorist extremists.

The book Theology of Hope by Christian de Chergé is one of the resources being recommended by organizers of the Foundations series for those who wish to go deeper in their study and reflection, de Margerie noted.

In his opening presentation, de Margerie also presented a brief overview of “markers of Christian thought” regarding Christian-Muslim relations, including documents of the Second Vatican Council — “the most authoritative Christian teaching in the 20th century” — as well as insights developed over the years by the World Council of Churches.

Scripture reveals that all are created in the image of God and that everyone on earth is included in God’s plan of salvation, said de Margerie. “We are all brothers and sisters in the created adopted family of God, from generation to generation.”

For instance, the Vatican II document Nostre Aetate (In Our Time) states: “The church has also a high regard for the Muslims. They worship God, who is one, living and subsistent, merciful and almighty, the Creator of heaven and earth, who has also spoken to humanity. They endeavour to submit themselves without reserve to the hidden decrees of God, just as Abraham submitted himself to God’s plan, to whose faith Muslim eagerly link their own.”

De Margerie concluded with “thoughts from an old pastor,” stressing the depth and breadth of God’s design. “Let us do our best to live by our own Christian faith and tenants,” he said.

“We try to give witness to our faith and our discipleship through the way we live and love, more than by heaping theoretical beliefs on others…. If we have fears or aware of prejudices that we harbour or inherited, let us not beat ourselves up about them, but rather try to outgrow them through prayer, study and helping.”

Responding to de Margerie’s presentation, Muslim associate chaplain Dr. Joel Schindel shared his own experience, born and raised in Canada as a Muslim, whose mother is a Christian, a member of the United Church of Canada for her entire life and who enjoys utmost respect from her Muslim grandchildren. “This is a model we as a pluralistic society need,” he said, thanking those in attendance for challenging themselves by attending the series.

“Because of our current times, now more than ever we have the various cultural and faith communities here in Saskatoon growing, and we need to increase the mutual understanding and respect for one another (that) is so key to achieving the greater goal: collaborating to achieve the greater good.”

“Our lives are inspired by the prophet Muhammad, peace be upon him, whose life we believe is the last and final messenger of God,” said Schindel, pointing out that the Prophet lived in Mecca, which was a pluralistic society, including communities from many religious traditions, with Muslims as a minority.

“He faced discrimination for his beliefs and he worked to promote goodness with others nonetheless,” he said. “He later established a charter, a constitution, that safeguarded the rights of all within the community.”

Rather than forgetting the past, Schindel called for a reflection on past experiences between Muslims and Christians — the conflicts, the failures and the successes — to learn, to understand, and to find a way forward together.

The session concluded with a time for participants to write down questions about the Islamic faith, to be submitted to organizers and answered in subsequent sessions in the series.

The series continued the following week, with even higher attendance Oct. 25, when speakers included Imam Ilyas Sidyot, who summarized the teaching of Islam, and Dr. Brenda Anderson of Luther College, who provided an overview of Christian-Islamic relations through history.

For more information about A Christian Study of Islam: An Introduction, contact Rita Taylor at the Catholic Pastoral Centre in Saskatoon, 306-659-5831.

CMCO proudly serves as Canada’s national center for Muslim chaplaincy by providing liaison between our Ministry of Foreign Affairs and the Ministry of Education.